Another study confirms that ionizers and ozone generators can create unhealthy levels of ozone in poorly ventilated rooms. 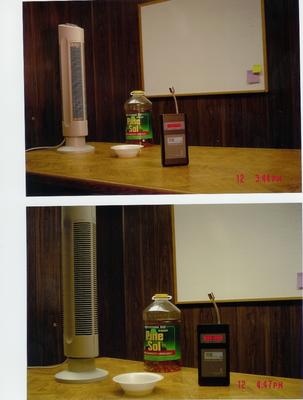 The news does not appear to be getting any better for ionizers, ozone generators or other devices that generate ozone and claim to be “air purifiers.” Another study has raised additional concerns about these devices. This study was done by scientists at the University of California – Irvine (UCI) and is published in the Journal of the Air and Waste Management Association. The study found that ionizers emit sufficient quantities of ozone to create potentially unhealthy concentrations – particularly in poorly ventilated rooms.

Many of the makers of these devices tout the fact that their products do not produce ozone in excess of the 50 parts per billion threshold mentioned in the FDA requirements for medical devices. But the way these ionizers and ozone generators are tested provides a somewhat misleading conclusion – that the concentration in a room will not exceed 50 parts per billion. What happens when these devices are used in a poorly ventilated small room like a bathroom (or a nursery with a baby sleeping in it)?

The researchers at UCI found that when they turned on an Ionic Breeze made by Sharper Image in a 207 cubic foot bathroom that the ozone level exceeded 150 parts per billion in just over 2 hours. This is well in excess of health-based standards set by the EPA and OSHA for outside smog exposure. Users of these devices could be literally creating a “Red Ozone Alert” day in their homes, schools, offices and other places these devices are being used.

In a WebMD article dated May 11th a spokeswoman from Sharper Image stated: “Sharper Image products were included in the study and, in fact, met all safety standards for ultra-low trace ozone emissions when the appropriate sized models were used in the manufacturer recommended room sizes. Why they chose to place the unit in a room size for which it is clearly not intended nor used is inexplicable.”

In our opinion, the researchers at UCI were right on target to analyze the devices in these conditions. After all this is an “air purifier.” It is sold as an air purifier and nothing is mentioned in the marketing literature about the restrictions for using the device. Why would a consumer be concerned about using an air purifier in any room – regardless of the size? It stands to reason that an air purifier would purify, not pollute, the air and to state that the device should be used in a room of the appropriate size and with the proper amount of ventilation is ludicrous. How can it be an “air purifier” if it has to be used in a well ventilated area?

Another concern is that the ozone created by these devices can be involved in a chemical reaction with volatile organics (like terpenes) and create millions of sub-micron sized particles. We have covered these reactions extensively elsewhere on this website. But the researchers at UCI have identified an interesting phenomenon. The particle increases recorded from these ozone/terpene reactions actually occur as sudden bursts which they describe as “particle explosion” events.

This explains what we observed several years ago when we did our experiments with the ozone generated from ionizers reacting with terpenes (like pine scented cleaners). We would take our particle counts in the room with the ionizer and a small bowl of Pine Sol and see moderate increases in particle counts. Then we would take a particle count just 15 minutes later and the count would jump by over 3,000,000 particles per cubic foot. Once it reached this “explosion point” we would max out our particle counter at 9,999,999 particles per cubic foot within a matter of minutes.

The above pictures illustrate this growth in sub-micron sized particles resulting from the ozone/terpene reaction. The first picture was taken at 3:44 PM and the particle count of particles over 0.3 microns was 1,263,400. The ionizer was turned on and the doors were closed in the room. The second picture was taken at 4:47 PM and the particle count was 6,591,500. When we took our next reading at 5:15 PM, the particle counter was maxed out at 9,999,999. It is also interesting to note that the ozone level in the room remained between 20 ppb and 30 ppb. Much of the ozone produced by the ionizer was being consumed in the ozone/terpene reaction. Ozone will react with various indoor surfaces such as carpeting, wall coverings, furniture, etc. The more “reactive” surfaces in the room, the lower the ozone measurement. So just because the ozone in a room is below 50 ppb, it does not mean that the ozone producing air cleaner is not contributing to indoor air pollution.

Again the important lesson to be learned here is that indoor air chemistry is complex and not easily understood. When you add chemicals to indoor air, you simply cannot be sure of the outcome. This study shows that ozone generators and ionizers can create ozone concentrations in poorly ventilated rooms beyond acceptable or safe limits. It is further evidence that these devices should not be used around infants, the elderly or anyone with a respiratory ailment like asthma, COPD or emphysema.

(This title was used in an article by Robert Roy Britt of LiveScience published by MSNBC.com on April 9, 2006. However, after being contacted by one of the ionizer manufacturers, the title of the article was changed to “Air Purifiers can create ozone pollution” in a “corrected” article dated May 12, 2006. The point of the correction was to emphasize the difference between ionizers and ozone generators. Ozone generators produce much higher levels of ozone than ionizers. And we would certainly agreee that ozone generators present a greater danger of excessive ozone exposure than ionizers. However, as Dr. Jonathan Samet of Johns Hopkins Bloomberg School of Public Health said in the May 2005 Issue of Consumer Reports: “We can’t guarantee safety at any ozone level, so it makes sense not to contaminate your living space.”)